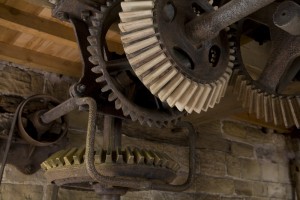 The Corn Mill was powered by water taken from a nearby stream; this water was channelled to the waterwheel via the Mill dam. A sluice gate controlled the flow of water to the Mill wheel.

The Milling area consisted of 2 sets of grinding stones (sill existing). Locally grown oats were brought to the mill by farmers. After drying in the kiln the sacks of oats were tipped via a hopper into the shelling stones (to the right on the upper floor). This removed the outer inedible shell from the inner edible part of the grain known as groats. The groats and shells passed through sieves and fans which separated both, the shells being collected and used as fuel in the drying kiln. The groats were then passed via elevators to the second set of grinding stones where they were ground into the finer oatmeal. The spacing of these grinding stones were controlled by the Miller depending on the product required, a wider separation resulted in a mostly pin head and courser meal (suitable for porridge and stirabout), whereas a close spacing produced mostly finer oatmeal (for oat cakes). 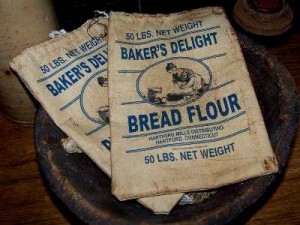 The preparation of meal for animal consumption was an altogether more straightforward process than for oatmeal as the outer shell did not have to be removed. The oats could have been passed through either set of stones and roughly broken (‘kibbled’) before bagging without the need to pass through the various sieves and fans.

The grinding stones were also capable of grinding wheat into wholemeal flour. As wheat does not have an inedible outer husk, the entire grain could be ground and the resultant wholemeal bagged without passing through the meal sieves and fans. 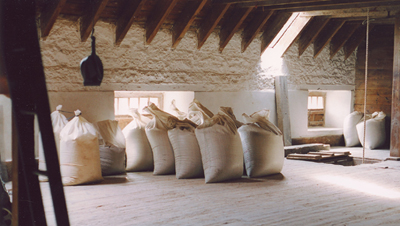 Find out more about the recent renovations here. 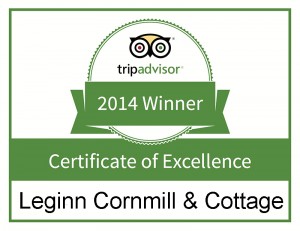